The Secret Teachings of Jesus as Recorded by His Disciples

“It came to pass, when Jesus had risen from the dead, that he passed eleven years discoursing with his disciples, and instructing them...” - The Pistis Sophia, first century AD

The Apostles wrote down what Jesus taught them during those eleven years, resulting in “The Pistis Sophia,” the most important Gnostic scripture. Includes an extensive commentary by Samael Aun Weor.

“The Pistis Sophia” is a sophisticated and deeply mystical teaching given by Jesus about the suffering of Sophia as she attempts to ascend to the highest spiritual truth. This scripture is remarkable for its profound mysticism, its clear rebuke of unethical behavior, and its perspective on the spiritual role of women. Having read this text, it becomes very clear why the established religious powers attempted to obliterate the Gnostics, but failed. Study of this teaching also inspires a re-evaluation of how the Christian Gospels have been interpreted for centuries.

About this scripture, the commentary author Samael Aun Weor said,

"The Hebrew Bible clearly connotes the Word of the Eternal One. However, we, the Gnostics, also have our very special Bible. I want to emphatically declare that this is The Pistis Sophia, whose original is in Coptic. It was found underground in Egypt, the land of the Pharaohs. The Pistis Sophia contains all the words of the adorable Savior of the world. It was written by the Apostles. Thus, all the Esoteric-Christic instructions that Jesus Christ gave to his disciples on the Mount of the Olives and other holy places is written within this book. This book had been conserved in secret for many centuries. In this book, the Adorable One left an extraordinary, formidable body of doctrine."

"All Gnostics must study The Pistis Sophia. This book must always be on the Gnostic altars." - Samael Aun Weor

I always have this on my alter. Master Samael's commentary is truly appreciated. I 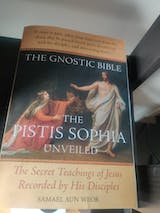 M
Michael Meraw
Single most important book of all time

This book is so in depth it is undeniably outstanding, the secret teachings of the lord Jesus christ and in depth explanations. Even explanations to the emerald tablets of Thoth. Which led me to gnosis

I'm loving this book as well as the others I have purchased from Glorian. So much knowledge and information. I will be buying more.

Great Read! This is a truly inspirational book that guides one to the source of wisdom and power. I would highly recommend it to anyone who wants to radically transform their life.

Wonderful aromatic essence that is not invasive.